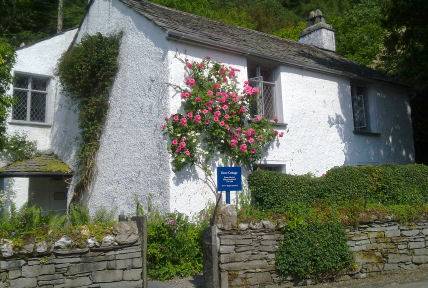 Dove Cottage, a traditional Lakeland cottage in the village of Grasmere, was William Wordsworth's first home in the lakes. The poet, his wife Mary and sister Dorothy lived there, they rented the cottage for 14 years from 1799 to 1808. 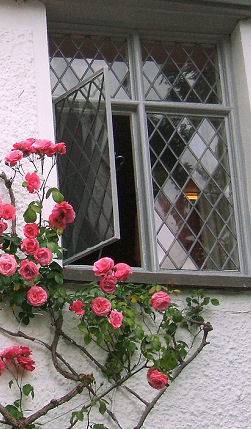 Dove Cottage is where he is believed to have written his best poetry. His "Ode: Intimations of Immortality", "Ode to Duty", "My Heart Leaps Up" and "I Wandered Lonely as a Cloud", together with parts of his autobiographical epic, The Prelude were all composed here.

The cottage dates to the early seventeenth century and was originally an inn called the 'Dove and Olive Bough', which was included in a list of public houses in Westmoreland in 1617. It ceased to operate as an inn in 1793, shortly before the Wordsworth's rented it, the inn is mentioned in his poem 'The Waggoner'.

He first came across the cotttage in 1799 while walking with his brother John and Samuel Taylor Coleridge. He was at the time searching for a place where he and his sister Dorothy could set up home and moved in with his sister just a few weeks later, they paid an annual rent of £5.

Little has changed in Dove Cottage since it was occupied by the Wordsworth family. The cottage is entered through a rustic style stone porch, leading into the quaint stone flagged and low ceilinged parlour, where a roaring fire welcomes the visitor on cold days. The room contains a cooking range and a window seat. The dark oak wainscotting which covers the walls dates from the time when Dove Cottage operated as a public house. 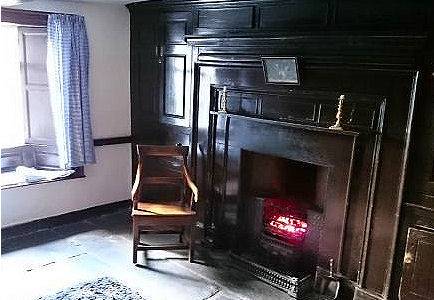 The adjacent smaller room was used by the Wordsworths as Dorothy's bedroom. Dorothy kept a journal during the years she spent at Dove Cottage. The journal was published in 1897 as The Grasmere Journal, providing intimate details of the family's daily life and of their visitors. Wordsworth often took poetic inspiration from his sister Dorothy's journal. An entry in her journal from 1802, which recalls their trip to Ullswater, was the inspiration for his most famous poem "I Wandered Lonely as a Cloud" in 1804. There is also a kitchen and a small buttery, used as a larder, on the ground floor. Most of the furniture on display was owned by the Wordsworths. The house had no no running water and the toilet was also outside in the garden.

Creaking wooden stairs lead up to the bedrooms and the study, where interesting portraits of the Wordsworth family are displayed, along with those of family friends Southey and Coleridge. William's upstairs study boasts fine views over the fields to Grasmere lake. The three other upstairs rooms were used as bedrooms, the small room over the buttery was once the nursery for the Wordsworth's children. In 1800 the walls of the small bedroom were covered with newspapers in an attempt to insulate the room, they were later removed, but were replaced with copies in the 1970s. 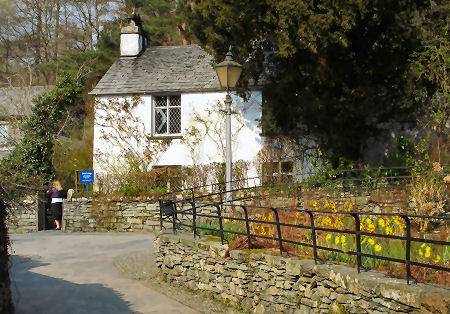 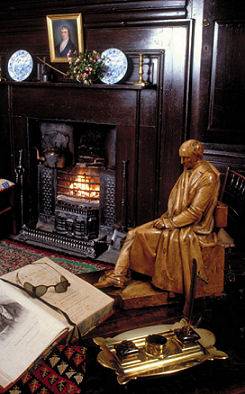 Local tradition states that when Sir Walter Scott stayed with his friend, the tee-total Wordsworth who would not allow alcohol in the house, Scott would lock the door of his room, climb out of the window and make straight for the Swan Hotel in the village, to which ends he was driven to to obtain his daily dram of Scotch whisky. The household it is reported, on entering the inn with him, were puzzled as to why all the staff appeared to greet him as an old friend.

Dove cottage was acquired by the Wordsworth Trust in 1890 and first opened to the public in 1891.

The adjoining award winning Wordsworth Museum holds many of the poet's original manuscripts, Dorothy's Journal, which records her description of the daffodils at Ullswater, which was used by William in composing his most famous poem and works of art by John Constable, J.M.W. Turner, Thomas Gainsborough, Joseph Wright and Edward Lear.

Guided tours of the cottage take around 25 minutes. The Wordsworth Museum has a tea room, which sells meals and snacks and an excellent shop selling books and crafts relating to English Literature and the Lake District.